If Japanese culture can be seen around us every day in the little things, like a meticulously trimmed bonsai in a bank lobby or an omamori (good luck charm) dangling from a cell phone strap, Miyabi lies at the opposite end of the spectrum as a grandiose, in-your-face display of all things beautiful about Japan. 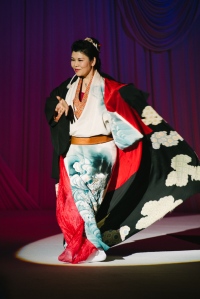 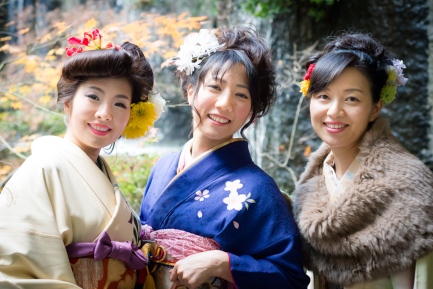 Miyabi is a three-day event hosted at Meguro Gajoen, a large and famous hotel which is itself known for its over-the-top display of Japanese culture. Gajoen is primarily a wedding venue and as such, has built an environment of perfect backgrounds for Japanese wedding photos. One side of the building is almost exclusively a floor-to-ceiling window overlooking a Japanese garden, complete with waterfalls, zen stone garden and koi ponds. As all gardens in Japan, the look changes dramatically from season to season with a little help from both nature and a talented grounds-keeping staff.

But back to Miyabi. This event brings together many of the arts that are collectively known as bunka, Japanese culture. Traditional dance, music, kimono, ikebana (flower arranging), shodou (calligraphy), and other arts are performed for the public in this breathtaking venue, all free of charge. If you were in Tokyo for a week and wanted a crash course on Japanese culture, just spend three days here and you’d be swimming in it.

My friend Paul Nethercott and I went to Miyabi to support Sheila, a woman who attends Paul’s church and whose work a film team we are working with from Huntington University in Indiana will be making a part of a documentary on this month. It is easiest to describe Sheila as a kimono expert and aficionado though officially, she is much more than that. With the depth of her knowledge about kimono, she is a national treasure to Japan.

On the day we attended, there was an oiran procession which Sheila’s daughter took part in. Oiran were the highest class of courtesan and in their day often attained celebrity status. Paul joked that the oiran’s costume could put Lady Gaga to shame and indeed, the oiran set the standard of haute couture in the same way Lady Gaga affects ours today.

We also viewed a kimono fashion show which Sheila herself was involved in. Though I expected the beautiful traditional kimono, there was a great representation of modern twists on the kimono for the younger generation: shades of punk, goth and good old rock and roll.

After the show we toured a room full of incredible ikebana, plants and flowers representing the New Year arranged in intricate shapes and designs. Ikebana is actually more than just flower arrangement; it’s the art of arranging living flowers.

Finally, we watched a performance by Yosakoi, a group combining traditional Japanese dance with coordinated flag waving. Several of the flags were on poles 4 to 5 meters longs and were waved gracefully over the heads of the audience. It was an energetic show of skill and stamina. 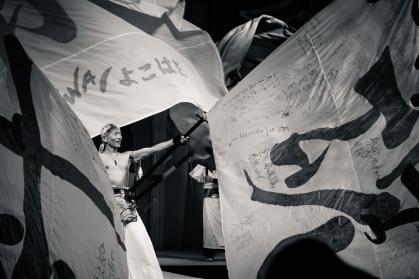 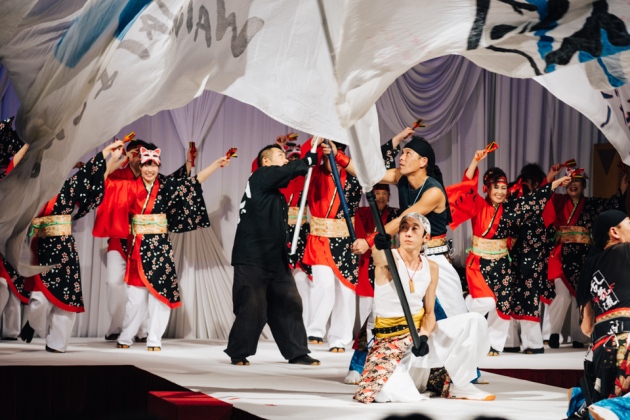 One might wonder why it is important as a Japanese ministry worker to attend and experience Japanese cultural events. The answer lies in the fact that the culture of a people reveals a lot about the keys to their hearts. If we examine each aspect of Japanese culture individually, one or more facets of the heart of the Japanese is revealed to us. And without a doubt, the very same things that Japanese value in their culture can be found in the gospel. Many Japanese view the Bible as a foreign work of literature and Christianity as a Western religion. But as we better understand Japanese culture, we can relate aspects of the Japanese culture to the Word of God, demonstrating that the Bible is God’s love story for all mankind.

One fine example is the art of tea ceremony. Our friend and co-laborer Matt Burns created a wonderful short called “Serving Through Tradition” that relates the tradition of serving tea to Biblical teachings. Several pastors in Japan are practitioners of tea ceremony as a way of connecting Japanese culture to the gospel.

Serving Through Tradition 茶道：伝統を通して奉仕する from CRASH Japan on Vimeo.

Tim Svoboda, President of YWAM San Francisco, gave us some sage advice in his Perspectives class: “The job of the missionary is to fall in love with the place they are in.” Everyday, God gives us a new and deeper love for the country of Japan, its culture and its people.

Watch Your Tone With Jesus!

Shinsuke Ohtomo, a pastor at Jesus Lifehouse International Church in Tokyo and “friend we have yet to meet”, has taken on the challenge of translating the Bible in way that is unique to the Japanese language. Because Japanese uses several different words for relating to others based on things like age, social status or tone, it is a very rich yet complex language when expressing relationships between people. Original translations of the Bible to Japanese used one very formal type of expression for the way Jesus related to others. However, we know that depending on the situation, Jesus used very different styles of communication: harshly to the hypocritical religious leaders, persuasively to the masses, and compassionately to those seeking him in faith, just to name a few.

Though often overlooked, linguistics plays an important role in how we relate to gospel. A great novel like Les Miserables would not play out nearly as well if it were written by an author of technical manuals rather than Victor Hugo. In Japanese, with its vast richness of vocabulary for expressing relationships between people, linguistics become even more important. This is another example of how contextualization helps reveal the fullness of the gospel in the heart language of the people it is being addressed to.

As our Japanese Christian network continues to expand, I keep “meeting” new people with amazing stories and ministries to the Japanese. “Meeting” in the sense that I am only able to make their acquaintance online and if I am lucky, have a Skype call with them to introduce myself.

Today, I exchanged messages with Kathy Oyama who co-pastors the Biblical Church of Tokyo with her husband Seiji. It turned out we attended this church once 3-4 years ago as a missionary family we know attend there. In the past few years, however, the church has made great strides in connecting with their community, an area of Tokyo with a growing number of young families, a rarity in Japan these days.

The Biblical Church of Tokyo is thinking outside the box to connect with their neighborhood. Here are a few things they are doing that make them exceptional in being an outward looking or “soto muki” church.

1. Participating in the community. Seiji and Kathy sit on the board of their community association along side local business owners and influential people in their neighborhood. By showing they are willing to serve their community in ways that are outside the scope of church activities, they are building bonds of trust and transparency with their neighbors and showing them they have no reason to fear the church.

2. Serving community needs without an agenda. The church found simple ways to serve the community by simply opening the church’s restroom to families playing in the park across the street. As they gained trust, they were able to offer more services, now opening a play center for use of the community families. At no time did they pressure anyone using the facility to attend church; they simply used the “soft sell” of posting information about classes and activities that might be of interest to local families. And the community members were astounded that the church never “forced religion” on them, which built a stronger bond of trust.

3. Relating to their community in the context of Japanese culture. Biblical Church of Tokyo embraces the beauty and uniqueness of Japanese culture. They host their own mochi making party on New Years Day. They celebrate Children’s Days and Respect for the Elders Day. Contextualizing the gospel is very controversial in Japan where so much of the culture is tied to idol worship and animism. Yet in order to make the gospel relevant to the Japanese, who see Christianity as a Western religion, it must be done. The Oyamas address the context of the culture carefully while maintaining the integrity of the gospel message.

4. Bonding with the community in service to others. The Oyamas invite their neighbors to participate alongside the church in serving others in their community. There is no greater opportunity to witness to others about the love of Christ than to work side by side with them. The greatest impact for the gospel in the tsunami affected region of Tohoku was not the people who were being served, but those in the periphery, family, friends and community who witnessed the selfless work of Christians for others.

In a country where the vast majority of the population is apathetic about or sometimes hostile to your faith, it’s easy to “circle the wagons” to protect your flock. But to do so is to ignore the Great Commission (Matt 28:18-20) and moreover, to deny the reason for our existence as children of God: to share the good news with those who have not had the chance to hear it. It takes courage to do what Kathy and Seiji are doing, but through their faithfulness, they are being  building bridges of love with the people around them to experience life in Christ.

Read more about what the Biblical Church of Tokyo is doing in Kathy’s article for Christianity Today.