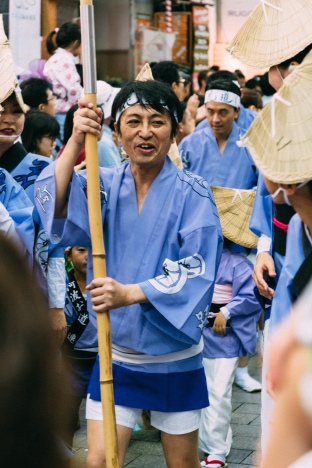 Summer festivals in Tokyo tend to be gatherings of 50,000 of your friends and neighbors, but the Koenji Awa Odori, with over 1,000,000 people in attendance over the two day event, still ranks as one of the largest in Tokyo. How did a festival in a quiet little neighborhood of Western Tokyo grow to such enormous proportions?

Likely, it has come about due to the now 10,000 participants in the festival, dance troupes from all of Tokyo and now Japan. The event is a constant stream of dancers, along the main street outside the station and spilling over into side streets. Awa odori (odori meaning dance) has its roots in Obon, the festival honoring the dead, but has grown into its own. While Obon festivals tend to be more restrained, Awa Odori use more instruments and more vigorous dance moves. Like Obon, spectators are encouraged to join in the fun. Like all festivals, food vendors set up stalls with delicious festival snacks (and of course, what would a festival be without beer?).

It makes sense to use this article to point out the difference between “honoring” and “worshipping” the dead. Many people falsely believe that Obon festivals “worship” the dead. This likely comes from the fact that followers of Taoist Buddhism believe the spirits of dead ancestors revisit the household altars (butsudan) during this time period and people pray at those altars. Prayers are not meant to be offered “to” these spirits, but on behalf of these spirits, whom the living may believe are trapped in some spirit world of suffering.

Obon is actually a celebration based on a Buddhist monk who prayed for his mother to be released from this world of suffering and in the process, recognized her love and selflessness to him. Through his recognition of the sacrifices she made for him, he danced for joy, which became Obon. So Obon is a time to “honor” the love and sacrifice of people, not unlike the American holiday of Memorial Day for those who gave their lives for the ideals of America.

The songs and dances of Obon are often based on the daily lives of the people of ancient Japan, filled with movements like hauling in fishing nets, mining for coal, and planting rice. Watching them is like a glimpse into the Japan of old. 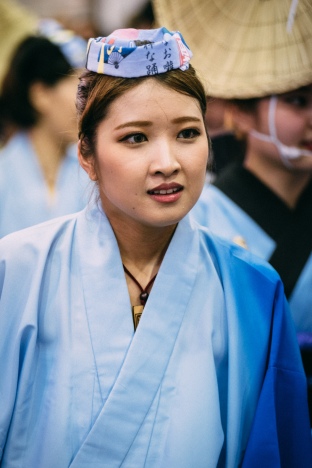 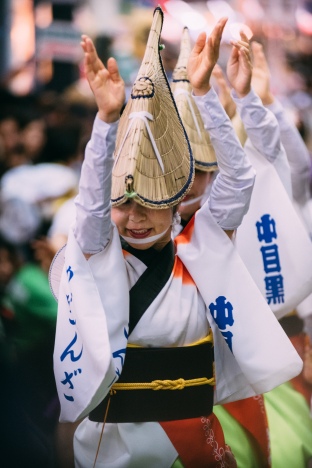 We attended this event as the kickoff “photowalk” of our Ekoda Photography Club. It was a great thought at the time, but now having experienced it, I would probably think better of taking a large group to this event in the future. We ended up losing a couple members of our group less than an hour into the event and with the swelling crowd and limited space to stand, it was going to be impossible to find them again. Additionally, it was very difficult to find good spots to take photos; some people who wanted good shots were there at 4:30am to stake out the best locations. This was frustrating for me and I’m sure even more so for less experienced photographers.

Even so, we did have an enjoyable time and got a few memorable pictures and probably many more good memories that we were not able to capture on camera.