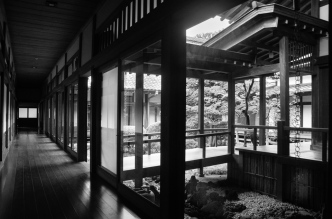 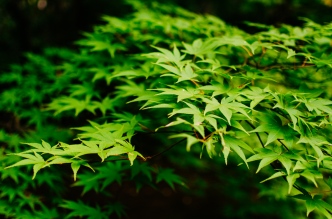 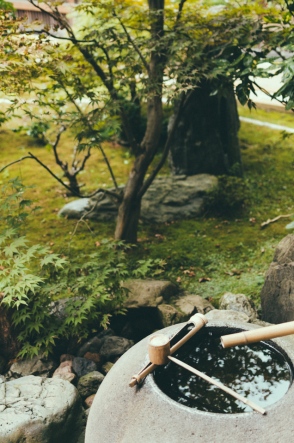 I finally found a benefit for my Japanese illiteracy. About 3 miles from my house is large park containing a fairly prominent Buddhist temple called Heirin-ji. The park itself is famous for incredible fall foliage, when many of the trees have leaves that turn fiery red, in contrast with the ones that stay brilliant green. Rather than waiting for the leaves to fully turn (and draw crowds of admirers from around the region), I decided to scout out the park on a nice summer day. The 500 yen entrance fee also came with free attended parking for my bicycle, which the very helpful woman who collected my money allowed me to park just outside her window.

At first, I was a bit disappointed to find out that 2 or 3 of the main buildings are under renovation, which means not only can you not go into them, but also that they are covered with screens and scaffolding that appear in the background of other photographs you shoot if you are not careful. As I wondered if I wasted 500 yen, I came to a huge building with a sign next to the open door. I scanned the sign for any kanji or phrases that I recognized but found nothing, so I went inside. At the front entrance, there was a place to leave your shoes and slippers to put on, typical of any building in Japan expecting visitors.

Since it was still summer and few leaves had even barely begun to turn red, I had virtually the entire complex to myself. So naturally when I stepped inside the building and didn’t see anyone else, I wasn’t surprised. I began snapping photos of the beautiful interior of the building, which housed the temple and several other rooms. One hallway led to the kitchen where the monks who lived on the complex prepared their meals. I had never seen a more simple yet elegant kitchen, now silent and dark except for the soft light filtering through the shoji screened windows. 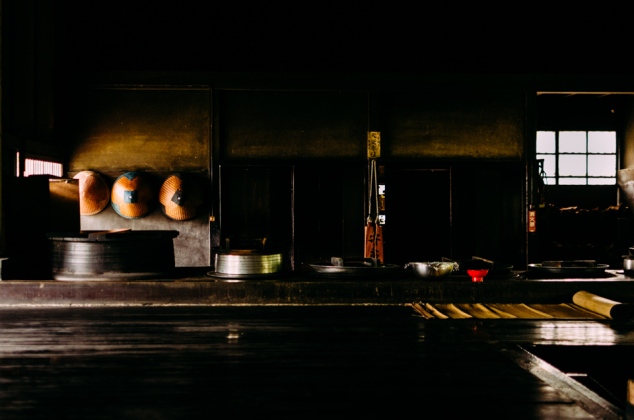 As I walked quietly around the complex, I passed a room where a monk was praying. He undoubtedly heard me as I walked to and fro, the shutter of my camera clicking away, but he made no attempt to talk to me. I walked down the hall past a gorgeous courtyard garden until I reached the rear of the complex where a wall of sliding glass doors separated the hallway from a huge, beautifully manicured zen garden. Outside one of the sliding doors were a couple dozen sets of rubber slippers, so I slid open the door, put on some slippers and took a walk outside in the garden. I took pictures for about half an hour before sitting and just drinking in the beauty of the place and the loud chirping of the semi (cicadas) in the trees all around. Finally, I went back inside, took a few more shots in the hallways, and left the way I came.

I was a little curious as to why I saw no one else in the building (except for the monk I saw praying and a few more who were talking in a room that I stayed away from to keep from bothering them). On a whim, I snapped a photo of the sign next to the door and sent it to a friend who could read Japanese to translate it for me. Her answer: “Please refrain from proceeding beyond this point.” Oops.

In truth, after I found out my mistake, I didn’t feel bad about trespassing because I am quite sure at least one of the monks knew I was in there taking pictures and yet he said nothing to me. Also, I was a very respectful guest and I did not touch anything, go into any rooms that weren’t already open and I spent a lot of time admiring their beautiful garden. Perhaps next time, they will invite me to have tea with them!

Later, as I walked alone in the forest around the complex, I understood why I was so alone in the park; I was a one man feast for the hordes of mosquitoes living there. Mosquito season officially ends in November in Japan when the weather gets too cold for them to survive. That will probably be the next time I visit to enjoy the fiery Autumn foliage.

One thing Christians and Buddhists can agree on is that is easy to see God’s handiwork in nature. His fingerprints are in all the details of the forest, from the perfect moss growing from the forest floor to the grand trees over our heads. I can’t wait to return to see it again in November.

One thought on “Stumbling Through Heirin-ji Temple”