What a wonderful day we had at California Festa yesterday! Though the turnout from the community was not huge, the smaller crowd created more opportunities for deeper relationships to be built with people. The above photo is the afternoon group (the morning group was bigger in both attendees and volunteers) which had a lot of kids who were already familiar with our team from last year.

Cooking class was a blast as always, as people shared laughter as they made snacks for the whole group. We made “pigs in a blanket” in the morning and “cookie hats” in the afternoon where the group was mostly kids. 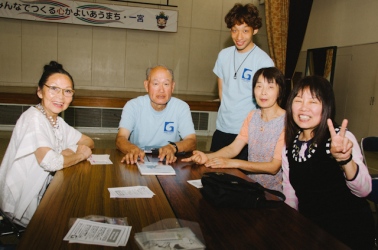 Both adult and kids crafts were big hits with card making and bead keychains. Because the groups were smaller, people had time to do multiple activities and many chose to spend some time in English conversation group also.

One lady we met in conversation group was 87 years old and going to America for the first time on a group tour in August. As it turned out, she was a member of a Buddhist sect promoting world peace, but this sect is very powerful in Japan and has traditionally been anti-Christian. Over lunch she talked with Pastor Yuya and found out about GCI church and that we were Christians from America. Instead of being turned off by that information, she told him she’d like to visit his church sometime! Praise God!

We also met another lady who had lived in America for a while and had attended a Christian church while she lived there. She had come to the Festa not knowing we were Christians, so she was very interested when she found out who we were and why we had come to Ichinomiya. She also talked to Pastor Yuya and told him she tried to go to church in Japan but did not like the traditional Japanese services which were so unlike what she had experienced in America. Yuya told her that GCI has a much more casual and contemporary worship service, and she became excited to attend. We pray she will come to service either this morning or next weekend when we have our special service at Otsuka Hotel.

Several of our missionary friends and homestay students came out to help us also, which was great because it allowed us to have deeper interactions with people in the community. They are such a blessing to us. 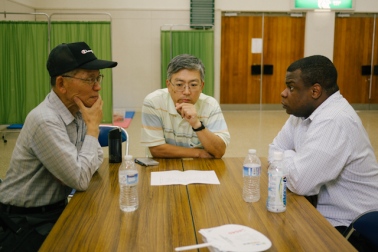 John Gibbs made a special trip out from Tokyo to help us and was a great addition to our English conversation group. There was much oohing and ahhing when he introduced himself in Japanese after the rest of the team introduced themselves in English. Due to his fluency in both English and Japanese, he was able to have much deeper conversations with several of the people he talked to and they really enjoyed the time they had with him. A couple of the men who had been practicing English for years spent a couple hours engaging John in all sorts of topics, tapping his knowledge of current events and technology.

The woman who works for the city that helped us organize the event said she thought this was the best California Festa she has been to, though it was much smaller. She felt the smaller size allowed people more time to meet our team members one-on-one. She even participated in English conversation for a while! Praise the Lord the city has been so receptive to our team and continues to be very supportive of future events with us.

Today will be church and fellowship with the GCI community. We hope to have a day at the beach with them and prepare some meals for them for dinner tonight. Please pray: